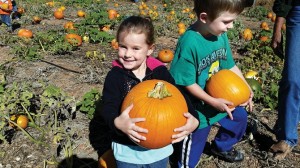 Leala Burback and Allan Flanagan with their pumpkins at the Payson Community Garden.
Sales support the garden.


Each year the Payson Commu­nity Garden grows a patch of pumpkins to sell for fall decorations. The gardeners invite community members to come on down and pick out their own pumpkin in return for a donation.

This year, master gardener and Town of Payson Mayor Kenny Evans supervised the crop to maximize production. All proceeds go directly back into the garden which donates thousands of pounds of food to local food banks each year.

To kick off the annual sale, pre-school students from the Safe Haven Child Development program get first dibs picking out the biggest pumpkin they can carry for a nominal fee.

The pumpkin patch is open every afternoon from 3 p.m. until dark.

But hurry, last year the patch sold out by the first weekend.