Squash bugs, Anasa tristis (order Hemiptera), are a common pest in vegetable gardens. They feed on plant foliage using mouth parts that let them pierce the foliage and suck plant sap. Their feeding results in plant wilt and in some cases plant death. Squash bugs target vegetable crops in the cucurbit family, such as pumpkin, squash, and melon and can be especially aggravating to gardeners when populations reach large numbers.
Identification
Squash bugs are 5/8 of an inch long and 1/3 as wide (Fig. 1). Adults are winged and grayish brown with a flat back. The edges of the abdomen and underside of the insect have orange to orange-brown stripes. If necessary, turn squash bugs over to better identify them.
Squash bug eggs are 1/16 of an inch long and laid in groups or clusters. Eggs are bronze to brick red in color and are usually found in groups of 15 to 40 on the underside of leaves or stems in the spring. Nymphs hatch 1-2 weeks later and are wingless, spider-like and often covered with a whitish powder. Nymph size varies between 3/16 to 1/2 of an inch. They range in color from mottled white to greenish gray and have black legs. Nymphs later turn dark brown and begin to resemble adults, growing wing pads in their later stages. After molting several times into increasingly larger nymphs (instars), they become adults (Fig. 2). This process takes 4 to 6 weeks.
Often squash bugs and stink bugs are mistaken for each other. They are similar in shape and both bugs have a disagreeable odor when crushed. However, stink bugs possess the name because they can also give off this odor when disturbed. Stink bugs are wider and rounder than squash bugs. In the garden, stink bugs are not a pest of cucurbits and prefer to feed on tomatoes and legumes.
Lifecycle
Squash bugs feed on garden crops of summer and winter squash as well as pumpkins. Both adults and nymphs can be found near the crown of the plant, underneath leaves or under dirt clods and other protective cover. When disturbed, they disperse quickly.

For overwintering, unmated squash bugs find shelter in the fall under dead leaves, rocks, wood and other garden debris. Once spring approaches, they fly from their protective habitat to nearby cucurbits where they feed, mate and lay eggs. Eggs hatch in 5 to 10 days, and this second generation of squash bugs overwinter and produce eggs the following spring.
Damage
Injury is limited to squash, pumpkin, melons and other plants in the cucurbit family. Adults and nymphs can cause damage by sucking plant juices. Leaves lose nutrients and water and become speckled, later turning yellow to brown. Under heavy feeding, plants begin to wilt, and the point of attack becomes black and brittle. Small plants can be killed completely while larger cucurbits begin to lose runners. The wilting resembles bacterial wilt, which is a disease spread by another pest of squash, the cucumber beetle. The wilting caused by squash bugs is not a true disease. Squash bugs may feed on developing fruit, causing scarring and death of young fruit.
Management
In spring search for squash bugs hidden under debris, near buildings and in perennial plants in the garden. Inspect young plants daily for signs of egg masses, mating adults or wilting. Place wooden boards throughout the garden and check under them every morning, then destroy and squash bugs found.
Cultural Practices
The best method for control is prevention through sanitation. Remove old cucurbit plants after harvest. Keep the garden free from rubbish and debris that can provide overwintering sites for squash bugs. At the end of the gardening season, compost all vegetation or thoroughly till it under. Handpick or vacuum any bugs found under wooden boards. During the growing season, pick off and destroy egg masses as soon as you see them. Use protective covers such as plant cages or row covers in garden where squash bugs have been a problem in the past and remove covers at bloom to allow for pollination. 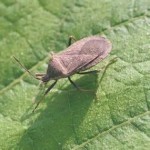 
Biological Control
The parasitic tachinid fly Trichopoda pennipes, which lays its eggs on squash bugs, has been introduced in California and may be found in some gardens. Look for eggs of the parasite on the underside of squash bugs. 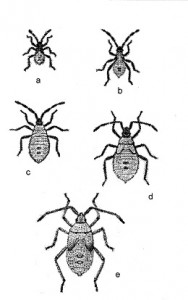 Fig. 2 Five stages of nymphs,from newly hatched (a) to mature (e)
Chemical Control
Squash bugs are difficult to kill using insecticides because egg masses, nymphs and bugs are often hidden near the crown of the plant and difficult to reach with sprays. Several insecticides are available that are less toxic to the environment including products containing soaps and oils such as neem oil, horticultural oil and canola oil. These soaps and oils are most effective on the smallest nymphs, but good penetration throughout the canopy is essential so that nymphs under the leaves and deep within the plants will be covered.